The New York Yankees have signed LHP Carlos Rodon to a six-year, $162 million deal, that includes a full no-trade clause. The AAV value for Rodon is $27 million per year.

Rodon, age 30, is coming off of two back-to-back AllStar campaigns, for the Chicago White Sox and San Francisco Giants. The six-year deal secures Rodon a hefty sum of money that takes him through his prime into the tail of his career. Rodon’s wife, Ashley, posted on Instagram, mentioning in her caption “The Yankees got a great one.”

The deal was finalized after news about the Yankee’s initial offer being too far from the reach of the agreement for Rodon and agent Scott Boras came out. The Yankees were not willing to commit to the amount that Rodon was looking for, a seven-year, $200 million deal, and the Yankees were able to call the bluff of Boras. 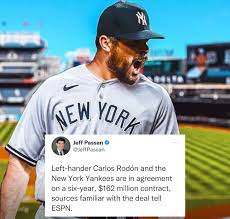 The Yankees sought out the lefty at the trade deadline last season but were unable to make the deal happen, as Giants GM Scott Harris backed out of the deal before anything was finalized. The organization formally announced the signing, posting on their official Instagram account, stating “Welcoming home, Carlos!”.

Now that the Yankees have added Rodon to a rotation that already includes ace Gerrit Cole, AllStar Nestor Cortes, and former AllStar Luis Severino, manager Aaron Boone has a formidable rotation that can lead the roster to another AL East title and another chance to contend for the World Series.

Still, there exist deep holes in the Yankees depth charts, Shortstop and Left Field specifically, with many fans hoping for significant upgrades by the time opening day rolls around in March. GM Brian Cashman will have to make improvements to make sure his team is the best fit for success.